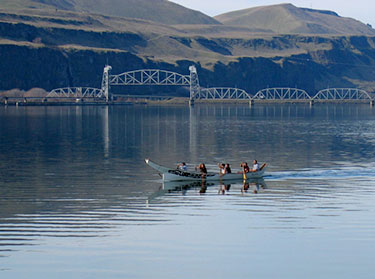 It’s 1942. I stand above Celilo Falls, holding tight to my father’s hand. Spray stings my face. Water thunders in my ears and pounds a drumbeat in the black basalt beneath my feet. Native fishermen lean from flimsy scaffolds, thrusting nets on long poles into the turbulence below.

It was a magical place before The Dalles Dam reservoir swallowed the falls, drowning tradition that spanned millennia, and stabbing the river in its heart—literally, because Celilo Falls served as pump and heat regulator for the lower river, just as Kettle Falls did for the upper river before Grand Coulee Dam.

My father understood what Celilo Falls meant to the Native Americans who fished and traded there, and to the health and wellbeing of the Columbia River and the planet. But like people of that era, he accepted the havoc wrought by dams as the price society had to pay for “progress.”

Today’s Columbia River is a string of sluggish, oxygen-depleted, radioactive, fish-unfriendly, heavy-metal holding ponds. The Dalles Dam is an anachronism waiting for its power-generating replacement to render it obsolete. It’s time we restored a free-flowing Columbia at Celilo Falls.

As Portland poet Walt Curtis states the case, “To bring back Celilo Falls is to inspire the will to heal the natural world. Let’s make the first bold move.” Envision the recovery of the river, the return of the salmon, the revival of an ancient culture.

Utopian? Sure. But we put a man on the Moon. We can find substitutes for fossil fuels. We can devise ways to irrigate fields and move wheat to market. We can transform The Dalles Dam into The Dalles Museum of Natural and Cultural History.

Let’s help The Mighty Columbia regain its place among the world’s great rivers! The impact will ripple.